(The Conversation) — The U.S. Supreme Court will soon decide the fate of Roe v. Wade, the landmark 1973 decision that established the nationwide right to choose an abortion. If the court’s decision hews close to the leaked draft opinion first published by Politico in May 2022, the court’s new conservative majority will overturn Roe.

Rancorous debate about the ruling is often dominated by politics. Ethics garners less attention, although it lies at the heart of the legal controversy. As a philosopher and bioethicist, I study moral problems in medicine and health policy, including abortion.

Bioethical approaches to abortion often appeal to four principles: respect patients’ autonomy; nonmaleficence, or “do no harm”; beneficence, or provide beneficial care; and justice. These principles were first developed during the 1970s to guide research involving human subjects. Today, they are essential guides for many doctors and ethicists in challenging medical cases.

The ethical principle of autonomy states that patients are entitled to make decisions about their own medical care when able. The American Medical Association’s Code of Medical Ethics recognizes a patient’s right to “receive information and ask questions about recommended treatments” in order to “make well-considered decisions about care.” Respect for autonomy is enshrined in laws governing informed consent, which protect patients’ right to know the medical options available and make an informed voluntary decision.

Some bioethicists regard respect for autonomy as lending firm support to the right to choose abortion, arguing that if a pregnant person wishes to end their pregnancy, the state should not interfere. According to one interpretation of this view, the principle of autonomy means that a person owns their body and should be free to decide what happens in and to it.

Abortion opponents do not necessarily challenge the soundness of respecting people’s autonomy, but may disagree about how to interpret this principle. Some regard a pregnant person as “two patients” – the pregnant person and the fetus.

One way to reconcile these views is to say that as an immature human being becomes “increasingly self-conscious, rational and autonomous it is harmed to an increasing degree,” as philosopher Jeff McMahan writes. In this view, a late-stage fetus has more interest in its future than a fertilized egg, and therefore the later in pregnancy an abortion takes place, the more it may hinder the fetus’s developing interests. In the U.S., where 92.7% of abortions occur at or before 13 weeks’ gestation, a pregnant person’s rights may often outweigh those attributed to the fetus. Later in pregnancy, however, rights attributed to the fetus may assume greater weight. Balancing these competing claims remains contentious.

The ethical principle of “do no harm” forbids intentionally harming or injuring a patient. It demands medically competent care that minimizes risks. Nonmaleficence is often paired with a principle of beneficence, a duty to benefit patients. Together, these principles emphasize doing more good than harm. 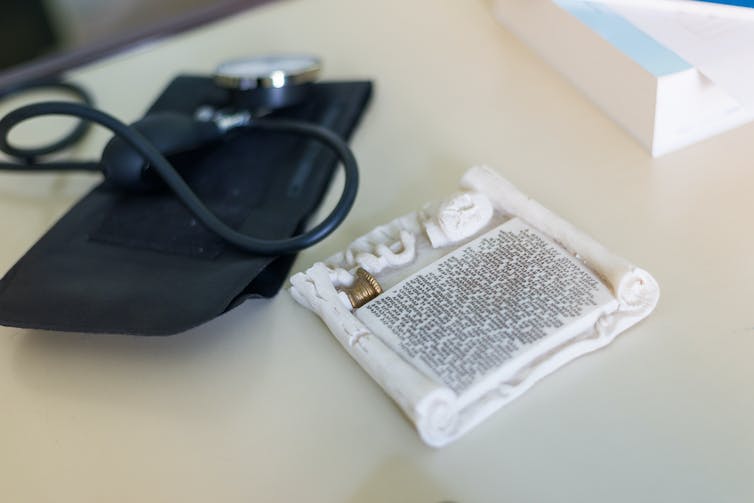 The Hippocratic Oath, a traditional code of ethics for doctors, stresses doing no harm.
Janko Maslovaric/iStock via Getty Images Plus

Minimizing the risk of harm figures prominently in the World Health Organization’s opposition to bans on abortion because pregnant people facing barriers to abortion often resort to unsafe methods, which represent a leading cause of avoidable maternal deaths and morbidities worldwide.

Although 97% of unsafe abortions occur in developing countries, developed countries that have narrowed abortion access have produced unintended harms. In Poland, for example, doctors fearing prosecution have hesitated to administer cancer treatments during pregnancy or remove a fetus after a pregnant person’s water breaks early in the pregnancy, before the fetus is viable. In the U.S., restrictive abortion laws in some states, like Texas, have complicated care for miscarriages and high-risk pregnancies, putting pregnant people’s lives at risk.

However, Americans who favor overturning Roe are primarily concerned about fetal harm. Regardless of whether or not the fetus is considered a person, the fetus might have an interest in avoiding pain. Late in pregnancy, some ethicists think that humane care for pregnant people should include minimizing fetal pain irrespective of whether a pregnancy continues. Neuroscience teaches that the human capacity to experience feeling or sensation requires consciousness, which develops between 24 and 28 weeks gestation.

Justice, a final principle of bioethics, requires treating similar cases similarly. If the pregnant person and fetus are moral equals, many argue that it would be unjust to kill the fetus except in self-defense, if the fetus threatens the pregnant person’s life. Others hold that even in self-defense, terminating the fetus’s life is wrong because a fetus is not morally responsible for any threat it poses.

Yet defenders of abortion point out that even if abortion results in the death of an innocent person, that is not its goal. If the ethics of an action is judged by its goals, then abortion might be justified in cases where it realizes an ethical aim, such as saving a woman’s life or protecting a family’s ability to care for their current children. Defenders of abortion also argue that even if the fetus has a right to life, a person does not have a right to everything they need to stay alive. For example, having a right to life does not entail a right to threaten another’s health or life, or ride roughshod over another’s life plans and goals.

Justice also deals with the fair distribution of benefits and burdens. Among wealthy countries, the U.S. has the highest rate of deaths linked to pregnancy and childbirth. Without legal protection for abortion, pregnancy and childbirth for Americans could become even more risky. Studies show that women are more likely to die while pregnant or shortly thereafter in states with the most restrictive abortion policies.

Minority groups may have the most to lose if the right to choose abortion is not upheld because they utilize a disproportionate share of abortion services. In Mississippi, for example, people of color represent 44% of the population, but 81% of those receiving abortions. Other states follow a similar pattern, leading some health activists to conclude that “abortion restrictions are racist.”

Other marginalized groups, including low-income families, could also be hard hit by abortion restrictions because abortions are expected to get pricier.

Politics aside, abortion raises profound ethical questions that remain unsettled, which courts are left to settle using the blunt instrument of law. In this sense, abortion “begins as a moral argument and ends as a legal argument,” in the words of law and ethics scholar Katherine Watson.

Putting to rest legal controversies surrounding abortion would require reaching moral consensus. Short of that, articulating our own moral views and understanding others’ can bring all sides closer to a principled compromise.

(Nancy S. Jecker, Professor of Bioethics and Humanities, School of Medicine, University of Washington. The views expressed in this commentary do not necessarily reflect those of Religion News Service.)

RELATED: For red-state clergy who back abortion rights, losing Roe is a call to action

When is it time to leave America?