You might have seen the post here earlier this morning in which LAGOP chairman Louis Gurvich has called for an investigation – potentially leading to the impeachment – of Gov. John Bel Edwards over not one but two separate gross derelictions of duty – one being the misrepresentation that Attorney General Jeff Landry was signing on to Edwards’ attempts to impose himself into the criminal case against Pastor Tony Spell, and the other having to do with revelations Edwards covered up the Ronald Greene killing.

While the Spell case was a breathtaking and brazen bit of chicanery, and if Edwards’ executive counsel Matthew Block ends up being disbarred over it we wouldn’t be surprised or offended, it’s the latter which is the real danger here.

We’ve said from the very beginning that it would be an earth-shaking revelation should proof emerge that Edwards covered up the Greene case – and we expected that proof would eventually surface, because of course he covered it up.

After all, let’s remember the elements.

Do we know that John Bel Edwards committed a crime in covering up the killing of Ronald Greene until after he was safely re-elected? Not exactly. But we do know this – he repeatedly lied when he knew the real circumstances of Greene’s death.

We can say that because his text messages have gotten out, and there’s one in particular which isn’t good. 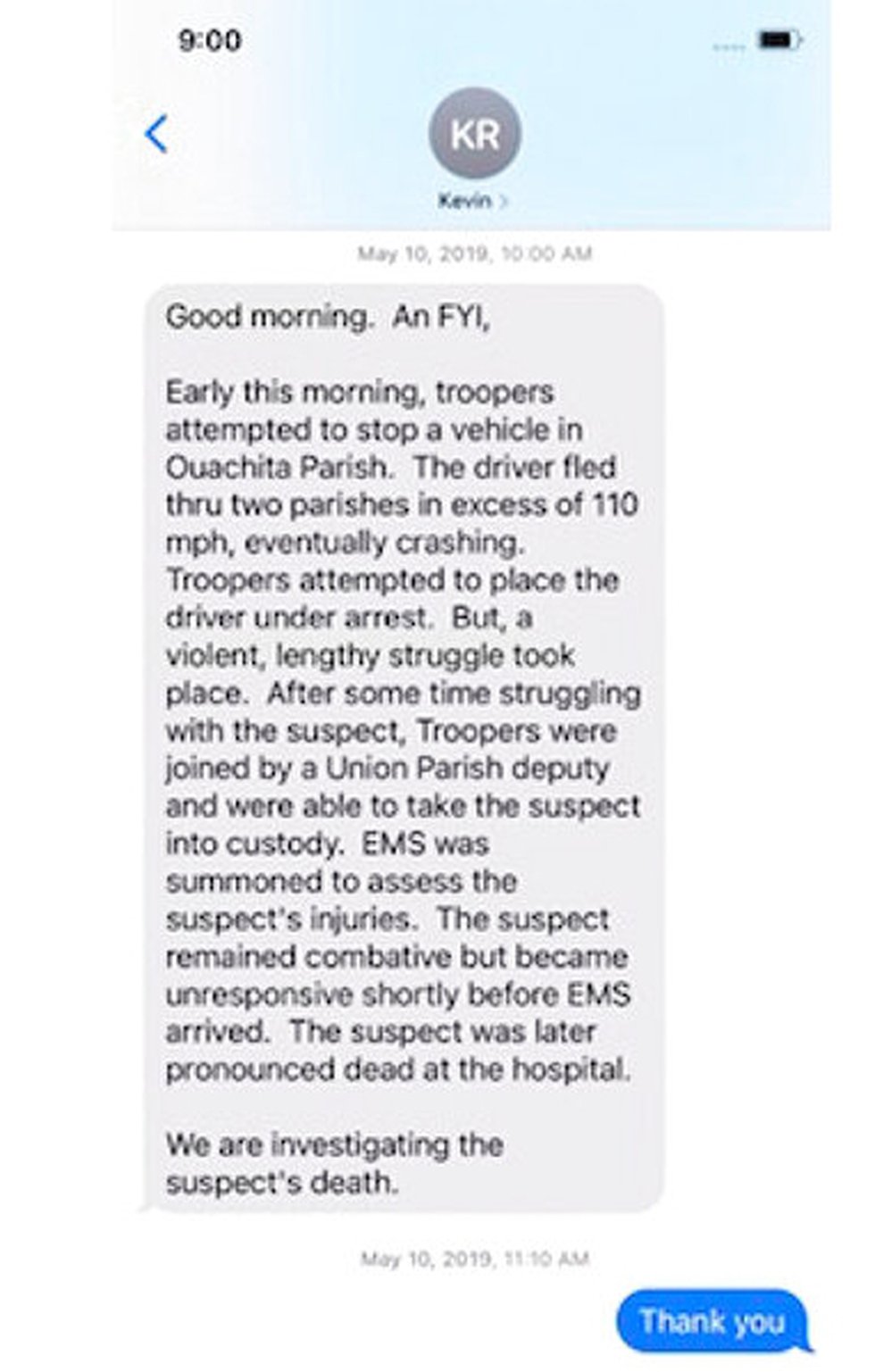 That’s an exchange from Kevin Reeves, then-commander of the State Police, and Edwards. It proves that Edwards knew Greene didn’t die from a car crash. Which matters, because Edwards had publicly stated that lie and what’s worse, he shined Greene’s family on while expecting the black vote to roll in for him.

And Kevin Reeves was allowed to retire gracefully in October 2020 just before all of this began to tumble out last spring. His chief of staff was appointed as the head of the state gaming board, at least until the word hit that he’d be made to answer about the Greene controversy at his confirmation hearing last year, several months after the appointment. He resigned instead of submitting to those questions.

And the FBI is investigating this whole thing. House Speaker Clay Schexnayder, we’re told, went and talked to them after he was highly dissatisfied with Edwards’ line of BS about the situation.

“Schexnayder said this week that the governor told him there was no need for further action from the legislature because ‘Greene died in a wreck.’ The speaker said he never moved forward with the investigation to avoid interfering with the federal probe,” the report states. “The governor’s spokesperson acknowledged he briefed the legislative leadership on his “understanding of the Greene investigation” and said his remarks were consistent with his public statements.”

And over the weekend Clay Schexnayder popped out a letter in which he says he’s had discussions with Senate President Page Cortez and Attorney General Jeff Landry about moving forward with an official investigation of the Greene situation and Edwards’ involvement in covering it up. 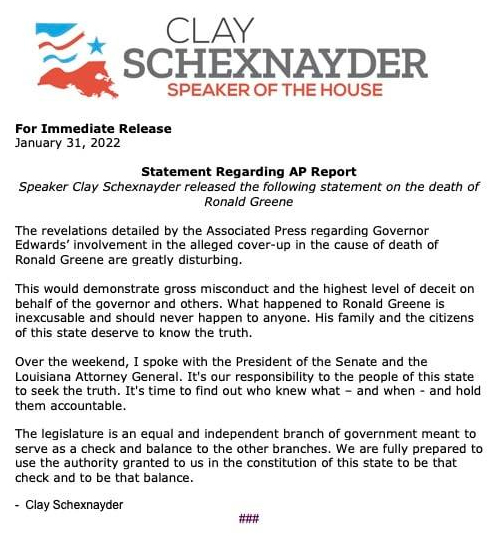 What does “hold them accountable” mean? Well, the word we started hearing yesterday involves impeachment, something there is zero history of in Louisiana but it’s in the state statutes. Impeaching a governor in Louisiana works just like impeaching a president in Washington, DC. You need a majority vote in the House to impeach, and a two-thirds vote in the Senate to remove.

So let’s play that out as a matter of speculation.

Are there 53 House members who’d vote to impeach, and 26 Senators who’d vote to convict, on the Ronald Greene coverup? What if the Tony Spell thing and Edwards’ refusal to honor the House’s petition to dissolve his COVID emergency order, which did an enormous amount of economic damage to the state and a laughably small amount of good in stopping the spread of the virus, was thrown into the mix? What about Edwards’ tyrannical disregard of the House Health and Welfare Committee’s overwhelming vote to stop him from adding the COVID vaccine to standard immunization protocols for public schools?

What would the Black Caucus think about this? In that WAFB report cited above , above, Sen. Cleo Fields wasn’t particularly supportive of Edwards…

Louisiana State Senator Cleo Fields says he will, “wait and see” what other developments come out of a federal probe into the 2019 death of Ronald Greene.

“There’s a lot that is yet to be known,” said Fields, who also serves on a state senate committee formed for Louisiana State Police (LSP) oversight. “Quite frankly, I’m going to wait and see what else comes out, if anything.”

One wonders whether Rep. Ted James, who was the chair of the Black Caucus, knew something when he resigned to take a job as a regional administrator with the Small Business Administration. Because this whole thing makes the Black Caucus look like a bunch of chumps.

They’ve backed Edwards to the hilt, after all, and what have they gotten for it? Not a lot. They got a massive sales tax hike they consider regressive and they got Medicaid expansion which doesn’t seem to have generated better health care outcomes for their people. Black Louisianans dropped at alarming rates during the worst of COVID; they can’t be too happy about that.

And now it turns out that Edwards lied through his teeth to them about the Ronald Greene case while soliciting their help in getting pretty much every black voter in Louisiana to turn out for him in 2019, and there’s not much evidence anybody in the black community is better off for the experience? It won’t be much consolation to tell them that the white folks aren’t better off, either.

In a famous speech not long before he was assassinated, Malcolm X launched into a diatribe about how a “Dixiecrat is a Democrat,” making the point that the Democrat Party has consistently lied to black people about the deliverables it actually has brought to them. That was in 1965, but 57 years later it still applies and it came to mind assessing all of this.

Malcolm X talked about the black community as a “political chump.” That’s a good description of the black political establishment in Louisiana right now, and they’re beginning to realize it.

“It’s a serious concern,” House Democratic Chairman Sam Jenkins of Shreveport said in an interview with USA Today Network. “But we need to see what the governor’s explanation is before we take action.

“We need to hear from him.”

USA Today Network is seeking comment from Edwards and his staff.

And over the weekend at Washington Mardi Gras, we’re told all the white Democrat money fatcats were holding meetings about how they have to stick together and deny funding to any black Democrat candidate for governor in 2023.

We’ve talked about how the rather feudal nature of Louisiana’s Democrat Party, in which the white minority seems to delight in taking the top of the electoral ticket whenever it wants and the black majority, which is 60 percent of the party’s registered voters, is supposed to just take it, is beginning to crack up thanks to Gary Chambers’ announcement he’s running against Luke Mixon; both are challengers to John Kennedy for the U.S. Senate this fall (and neither have any chance to win).

Then you have this fiasco playing out, which essentially just hit the nitro on the transition of the Louisiana Democrats into a black-led party.

Because the lesson here is white Democrats might talk about how enlightened they are when it comes to race but they don’t do an actual damn thing to help black people. Edwards proved that conclusively with his Ronald Greene coverup. And there is zero reason why black Democrats ought to tolerate this sort of one-way street. Why be a political chump?

Does that lead to Black Caucus members voting to impeach Edwards? If it doesn’t, what does Gary Chambers, a big part of whose message is that “there are more of us than there are of them,” think of that?

Joining with Republicans to dump Edwards would be the power play of all power plays for Louisiana’s black Democrat majority. It would signal that black people control that party, and that given Edwards’ treatment of them in the Greene case it’s necessary that black people control that party and be in a position to negotiate directly with the state’s GOP majority in legislative and other settings.

Interestingly enough, if you talk to GOP legislators they’ll tell you they’d much rather deal solely with the Black Caucus than with Edwards or the other white Democrats who purport to speak for them. It’s a much more honest conversation. And in more successful southern states, that’s how it works.

Look, all of this might just blow over. But it really shouldn’t. This ought to be the reckoning we’ve needed in this state ever since Ronald Greene was beaten to death on that desolate roadside.

Will Biden’s “Woke Roads” Idiocy Slow Down I-49 Construction?

Some Facts For Your 4th Of July