Asked about the Court’s decision to overrule Roe v. Wade, striking down a nationwide right to an abortion that had stood for nearly 50 years, Rabhan said she and other members of her organization are “absolutely devastated, shocked and angry.”

But she insisted they are also filled with resolve.

“We vow to keep fighting,” she said. “This is not the end. There are things that we can do.”

It was a common sentiment on Friday among liberal-leaning religious groups like the NCJW, which have long advocated for abortion rights. As the Supreme Court pushes the question of abortion access back to the states, faith-fueled abortion rights advocates are readying an array of new efforts to preserve the current shape of abortion policy as much as possible despite the setback.

Catholics for Choice head Jamie L. Manson, who stood nearby Rabhan, said her group is pressuring lawmakers to pass the Women’s Health Protection Act. Passed by the House and awaiting action in a less receptive Senate, the bill would codify the provisions of Roe v. Wade into federal law. Manson said her group is also pushing President Joe Biden — a fellow Catholic supporter of abortion rights — to declare a public health emergency in the wake of Friday’s ruling in Dobbs v Jackson Women’s Health Organization.

On Saturday morning, Democratic Sens. Elizabeth Warren of Massachusetts and Tina Smith of Minnesota also urged Biden to declare a public health emergency in a New York Times editorial. Doing so, they argued, would unlock “critical resources and authority that states and the federal government can use to meet the surge in demand for reproductive health services.” 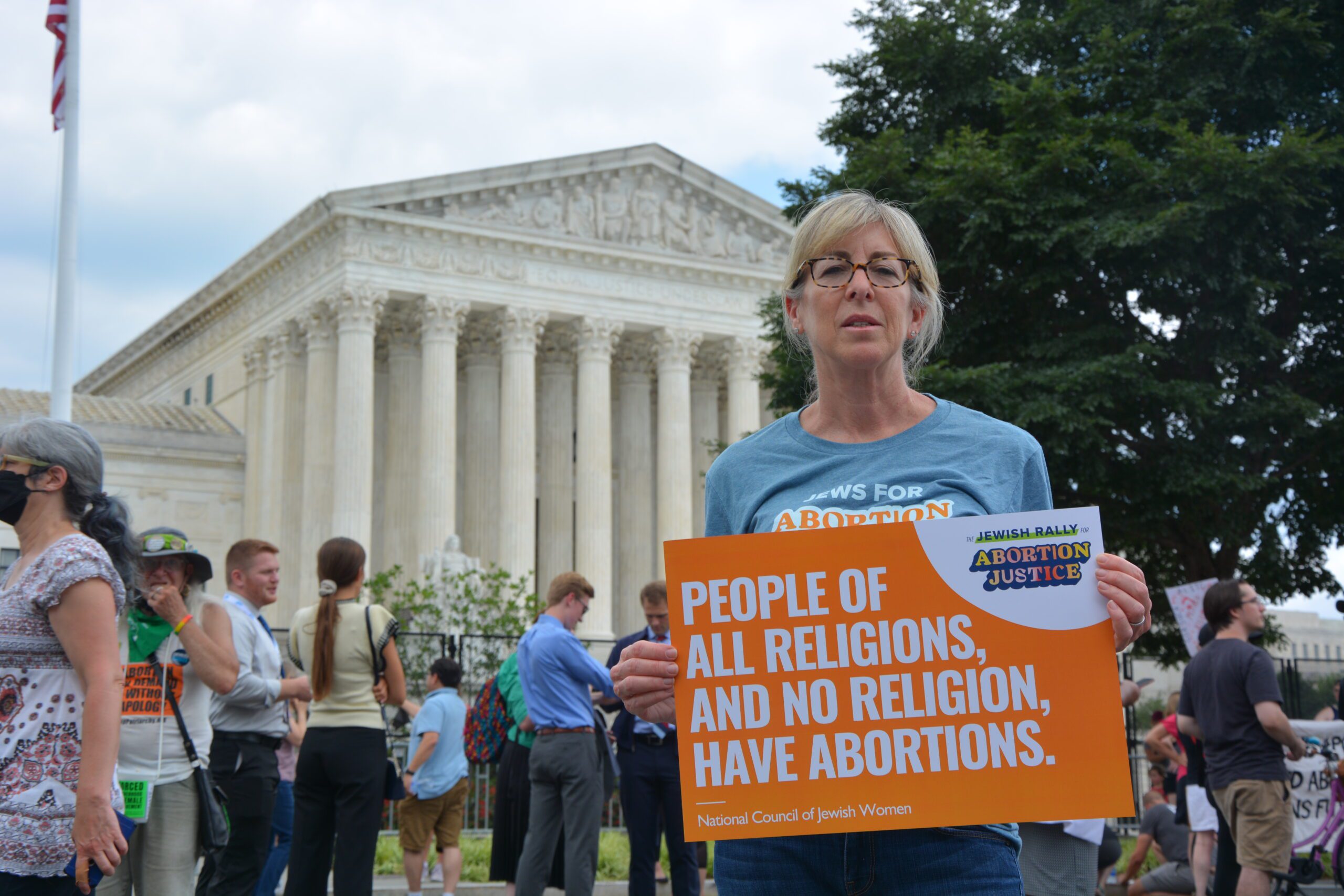 Jody Rabhan, chief policy officer for the National Council of Jewish Women, stands outside the U.S. Supreme Court on June 24, 2022.

Manson said the longer-term work of Catholics for Choice includes “emboldening Catholics who already are pro-choice to say ‘Not in the name of my faith,’” and to rally around the idea that the decision is a “violation of a Catholic principle of religious freedom.”

NCJW has similar plans. At the federal level, Rabhan said, lobbyists with NCJW and their allies will continue to push the Senate to pass the Women’s Health Protection Act, as well as work to ensure judges appointed to the federal courts, and ultimately the Supreme Court, “have very strong reproductive health rights and justice backgrounds.”

RELATED: For the religious right, a victory 50 years in the making

Rabhan said NCJW will also fight abortion restrictions at the state level, working to help states with more liberal abortion laws serve as “sanctuary states” and raising money through the Jewish Fund for Abortion Access to help women pay for the cost of terminating a pregnancy should they require it.

“Across the denominations within Judaism, there’s a recognition that Judaism permits and sometimes requires abortion if the life and the health of the mother is at risk,” Rabhan said.

“Our actions are more crucial than ever as we continue to create a future where every person has the right to bodily-autonomy, reproductive freedom, and dignity,” read the post.

Earlier this month, a synagogue in Palm Beach County sued Florida Gov. Ron DeSantis over the state’s 15-week abortion ban, which takes effect July 1, arguing it directly conflicts with a Jewish belief that abortion “is required if necessary to protect the health, mental or physical well-being of the woman.”

“Jewish law is very clear: Human life begins at birth, and up until the time of birth, a woman has autonomy to make the decision for herself,” Rabbi Barry Silver, who oversees Congregation L’Dor Va-Dor, the Jewish community that filed the suit, told Religion News Service in a phone interview.

“This law criminalizes Judaism and a bunch of other religions,” he said.

Silver noted that DeSantis signed the bill into law at an evangelical Christian church, where speakers discussed prayer and religious themes.

“They just did it right in a church and said, ‘Oh, God’s going to protect us,’ and ‘God is watching over us,’” he said. “It’s grotesquely un-American and unconstitutional.”

Silver said he has been contacted by others interested in filing similar lawsuits on religious freedom grounds in different states.

“We believe that there’s a plan B to the right of privacy argument, and that is the First Amendment,” he said. “You will see lots of lawsuits like this.” Jamie Manson, head of Catholics for Choice, speaks during demonstrations in front of the U.S. Supreme Court, May 3, 2022, in Washington. RNS photo by Jack Jenkins

Last month at a major rally on the National Mall, thousands of Jewish demonstrators gathered to protest abortion laws they say encroach on their religious freedom.

“Restrictive abortion laws rooted in just one understanding of when life begins limits our ability to fully practice our religious tradition,” Sheila Katz, head of NCJW, told the crowd on May  17.

Some Muslims and other Christians hold similar views, but legal challenges are likely to vary by state. Last year, faith leaders in Texas were part of a lawsuit to block a ban on abortion after six weeks of pregnancy. Among other things, clergy in the state argued a provision that allows private citizens to sue anyone who “aids or abets” someone seeking an abortion violates their religious freedom to counsel a person seeking the procedure.

Hours after justices handed down Dobbs on Friday, a trio of United Methodist pastors stood outside the Supreme Court wearing in colorful stoles and offering pastoral care to passersby. The clergy said that their denomination considers abortion a complicated issue, but nonetheless mostly a matter of individual choice.

One of the three, the Rev. Terry Gosnell, was visiting from Arkansas. Abortion “will not be available” there when he returns, he said, because of a “trigger” abortion ban that took effect the same day as the Supreme Court’s decision.

“That will give us opportunities to care for those women and families that are in grief over this decision,” said Gosnell, senior pastor at Trinity United Methodist Church in Fayetteville.

“In Arkansas, it’s already difficult to have abortion care, and now it’s going to be nonexistent. You have neighboring states — Texas, Missouri — that are doing the same thing. So a lot of women, especially poor women and women of color, are going to be the ones that get the brunt of this. The church is going to have to provide care for those people.”

RELATED: Creating a Catholic Church she can belong to

Conversely, the Rev. Rachel Cornwell, of Dumbarton United Methodist Church in Washington, D.C., said pastors who operate in regions with liberal abortion laws may have additional duties in the coming years.

“We may see people traveling to our area in search of abortion care,” said Cornwell, who noted she has ministered to women seeking abortions. “I think it’s an opportunity for the church to open our doors to see people in need, and to be part of larger networks.”

Gosnell was one of many who expressed concern about a concurring opinion issued on Friday by Justice Clarence Thomas, who suggested the court “reconsider” cases dealing with contraception and same-sex marriage.

“You’re going to see more and more rights being taken away,” Gosnell said.

How Hayden Christensen’s Daughter Helped Him Prepare For Obi-Wan

Across the US, Native Americans are fighting to preserve sacred land